Elevate artist Stephanie Jalland is waiting for the cuckoo to arrive and delighting in the sights and sounds that April brings.

‘The first of April, some do say,
Is set apart for All Fool’s Day,
But why the people call it so,
Nor I nor they themselves do know.’
Poor Robin’s Almanack 1760

So much to look and listen out for this month. I wonder what you look for or associate with April? 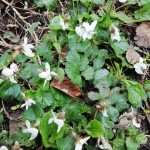 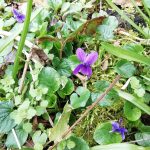 The showers are sometimes brief flurries of snow or hailstones followed by intense sunshine, but hidden in the green of the hedgerows and woodlands the first violets are carpeting the ground. Scentless, but beautiful are purple and white dog violets. The ancient Greeks thought of violets as symbols of fertility and romance, and in The Victorian Language of Flowers a purple violet indicated that the sender’s thoughts were ‘occupied with love’ for the recipient.

‘Violet is for faithfulness,
Which in me shall abide:
Hoping likewise that from your heart
You will not let it slide.’

As we shelter from the showers it’s astonishing to think that the cuckoo is on its way and to reach us it has survived sandstorms, hailstorms, exceptional cold, a wet summer, predators over the Mediterranean and in the Congo rainforest and has crossed the Sahara Desert in a continuous 50 -60 hour flight!

‘The cuckoo comes in April,
Sings the month of May,
Changes its tune in the middle of June
And July it flies away.’

Listen out for the call of the cuckoo, the winged clock of spring!

“O Cuckoo! shall I call thee Bird,
Or but a wandering Voice?”
William Wordsworth ‘To The Cuckoo’

If you hear the cuckoo on 14th April, St Tiburtius’ Day, turn out all the money in your pockets, spit and do not look at the ground. If you are standing on soft ground you will have good luck but if you spit on hard ground the cuckoo call will bring you bad luck!

I am hoping that the damp grass by the river counts as soft as I definitely heard the cuckoo on the 14th April last year after it arrived here in Downton on 11th April. The cuckoo heralds the onset of good weather and not more than a century ago farmers would sow barley when the first cuckoo was heard to insure a full crop. Meanwhile down by the river in the reeds it is only the male bird who says cuckoo, the female makes a laughter-like chuckling, bubbling sound!

‘When swallows fly high the weather will be dry’

The swallows, also a sign of spring, return to swoop and dive following the gnats and flies.

‘My little bird of the air,
If thou dost know, then tell me the sweet reason
Thou comest always, only in thy season
To build and pair.’
From ‘To an Early Swallow’ by Alice Cary

As you watch the birds, think of violets and shelter from the showers you could listen to a few April tunes. If you have online access try YouTube or Spotify:
‘April in Paris’ – https://www.youtube.com/watch?v=Mur2DI1BInE

‘On Hearing the First Cuckoo in Spring’ Frederick Delius – https://www.youtube.com/watch?v=3xHIhcstxUM

We love to include some of your own reflections in future posts and in our monthly print edition ‘Elevate your mood’ or quarterly printed tabloid ‘Take the time’. Why not write a few lines, try a poem or send us picture on the general theme of summer? Email to ArtCare or send to ArtCare, Block 29, Salisbury District Hospital, Salisbury SP2 8BJ.