Using funny word phrases to remember our birdsong our Elevate artist David Davies gives us an insight into these early risers!

The nightingale has a lyre of gold,
The lark’s is a clarion call,
And the blackbird plays but a boxwood flute,
But I love him best of all.
For his song is all of the joy of life,
And we in the mad, spring weather,
We two have listened till he sang
Our hearts and lips together.
William Henley (1849-1902)

This time of year, Britain’s dawn chorus is at its height. This natural concert starts early and extends until the sun has risen. Birdsong carries up to 20 times further during the cooler hours of morning, enabling male birdsong to reach more females. Entering into early summer, birds begin singing from 4am and a few even before this. So it’s likely in early Spring you might hear the beginnings of the dawn chorus just as the long-eared owl (‘hoo hoo hoo’) and the barn or ‘screech’ owl are ending what sounds like their closing conversations.

Around this early, quiet time, your ears would tune into the steady sound made by the breeze catching the tops of trees – conifers and pines give a steady rushing sound like distant running water whilst deciduous woodland is more restless like the sea.

Early rising birds have an order to performing. First to start piping up in the chorus sequence are blackbirds, wrens and robins. Then come the woodpigeons, carrion crows, magpies and goldfinches, who in turn are followed by dunnocks, sparrows and blackcaps. 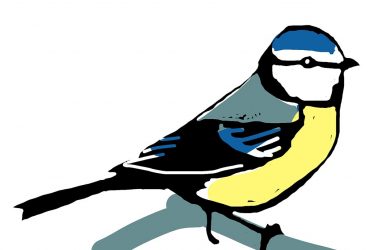 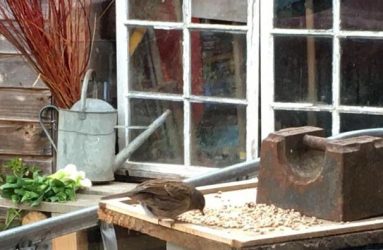 Birdsong has two functions. Male birds sing to convince females that they will be a good mate to raise chicks with. The second function is a bit like a garden fence… a clear message to outsiders to keep out as, in springtime, birds need sufficient territory to find food for their chicks. So a singing male bird, no matter how tuneful and eloquent, is effectively telling neighbours of the same species to keep away.

So do only male birds sing? Females do sing but usually less often and more quietly as females are staying hidden (and are also typically less colourful and patterned) so it’s much easier to miss their song.

Use funny word phrases to identify birdsong! We remember the yellowhammer’s song as “A little bit of bread and no cheeeeese” whilst wood pigeons say “Steal two cows, Taffy” (yes, they do) and collared doves, of course, chant “Uni-ted, Uni-ted, Uni-ted”…

Among the early songbirds is the Skylark which sings in flight in open country, full of life, energy and enthusiasm. Starting their song at ground level they work up into the sky, higher and higher until they’re just a speck.

Discover more about songbirds and their dawn chorus online:

We love to include some of your own reflections in future posts and in our monthly print edition ‘Elevate your mood’ or quarterly printed tabloid ‘Take the time’. Why not write a few lines, try a poem or send us picture on the general theme of summer? Email to ArtCare or send to ArtCare, Block 29, Salisbury District Hospital, Salisbury SP2 8BJ.