January Apples in the Snow

“…the cosy dark quiet of winter…” Elevate artist Stephanie Jalland reminds us of the delights of winter with the snowdrop and the tradition of wassailing the apple tree. 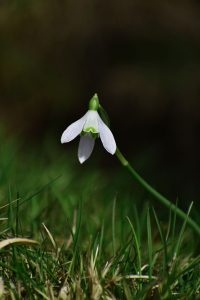 January named after Janus, the Roman god of beginnings and endings, hanging around in the places in-between, passages, doors, gateways. He is usually depicted as having two faces, looking at opposite ways, one towards the past and the other towards the future. I too, am enjoying the cosy dark quiet of winter but at the same time noticing the daylight hours getting longer minute by minute each day.

I don’t have to look far to be reminded of what is on its way in the near future as the first green tips of bulbs are poking through the soil. Buried deep in the dark and cold but just starting to show, like a lightbulb that brightens the room.

Galanthus Nivalis, the snowdrop, always the first to flower at the end of winter and the beginning of spring, symbolizes hope. The white of the snowdrop also symbolizes innocence and purity. Seemingly delicate and quivering but as Ted Hughes wrote in his poem Snowdrop, “Brutal as the stars of this month, Her pale head heavy as metal.”

A tough and resilient little flower to break through the frozen ground and stand in the frost but always a magical sight and to find a carpet of them really does look like snowfall. 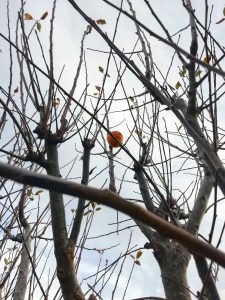 I have one apple still clinging to the tree in my garden, fat and yellow amidst the bare branches. This year the tree produced only four fruit. Later in the month it’s the turn of apple trees to be wassailed
or blessed. An ancient custom which involves drinking and singing to the health of the trees in the orchards in the hope that they will provide a bountiful harvest in the autumn.

The wassailers traditionally moved from orchard to orchard singing, shouting, banging pots and pans, and even firing shotguns, generally making as much noise as possible in order to both waken the sleeping tree spirits, and also to frighten off any evil demons that may be lurking in the branches. I think I need to wassail my tree.

We love to include some of your own reflections in future posts and in our monthly print edition ‘Elevate your mood’ or quarterly printed tabloid ‘Take the time’. Why not write a few lines, try a poem or send us picture on the general theme of spring? Email to ArtCare or send to ArtCare, Block 29, Salisbury District Hospital, Salisbury SP2 8BJ.