Send me a postcard

Summertime holiday postcards remind us of important people, places and feelings in a way that is almost like poetry says Elevate artist David Davies.

Summer brings thoughts of holidays past and present, and although the holiday ritual of sending postcards may be dwindling, I still love to receive one. Postcards I have kept, particularly those sent by my grandmother in the 1970’s, say so much about the people, places and feelings that were important to her and so, over time, have become important to me.
Postcards are wonderful conversation starters and I often use my collection of old cards (found at seaside bric-à-brac shops) with creative group work. I notice the stamp and postmark first and then the postcard image itself – a photograph that usually shows how we hope a picturesque view or relaxing resort should look.

I imagine where the postcard might have been bought, the postcard stand, the shop, the shopkeeper. Even the smell and how dog-eared it is all add to the memories and stories and make these physical and tangible again.

But it is the familiar layout of a postcard, the space to give news with few words squeezed into short lines, the equal space opposite for address and stamp, and the greetings and sign-offs that capture the human story. And, that someone has taken the trouble to catch the post, that the postcard has travelled between places, handled by different people, possibly by train or airplane as it is delivered, received and read.

Often, a postcard received will be passed around and read several times within a household before being propped on a mantelpiece or pinned on a noticeboard, and perhaps kept as a memento.
Frequently, the words on postcards seem like small poems in the way they capture moments and feelings. I really like this postcard sent in July 1964 concerned about life back at home, alongside the era of milk deliveries:

I have a feeling I may have
confused you about the milk? I have
asked the milkman (Peter) to
deliver two pints on Saturday.
…keep it in your fridge
until we return.
If you go out before we arrive
please put it back outside.

And this one postmarked 5.45AM, Aug 6th 1908, signalling a forthcoming letter, shows how frequently postcards were used, sometimes for very brief messages:

Dear Margaret I am going to write
first thing in the morning
– Love from all.

Sent from the Scottish borders this postcard marked June 1970 suggests, perhaps, an idea for health and wellbeing:

How lovely it was to get your letter
on arrival. Dad says you must bring
Michael to the mountains soon.

Often postcards show those at home – family, friends, even pets – that they are not forgotten. I really like this holiday postcard to work colleagues – how everyone back at the office is included:

Messrs. Freeman, Ross & Paynter, June 1938
Friday ~ Hello Everybody
Hope Nora had a good holiday and that Kathleen has got all the statements out. Trust Beatrice is not snowed under and that Mary had a handkerchief day when saying goodbye. Hope Gordon & Miss Hurst are now settled down to hard work. Yours sincerely J.V.

And from Newton Abbot, 21st July 1999, news about the bookshop cat:

Dear Mary, A very importunate cat has been walking back and forth on this bookshop counter grumbling loudly. I can only write this now thanks to the shop lady
who has removed him/her.

It rained all the time we were in the car, but
when we had a picnic, the sun was shining. Then onto Burns cottage where Gordon bought me the Poems & Songs of Robert Burns.

I liked this final postcard message because of all the numbers in it (which I’ve arranged at the beginning of each line). It also refers to a change in the weather – another British holiday tradition!

2:15PM September
24th Scarborough
1906 – Thank you for your postcard. I caught
30 fish the day you wrote
1 of which weighed
2 pounds. I have now caught about
100 in
4 catches. You have taken the fine sea weather with you. 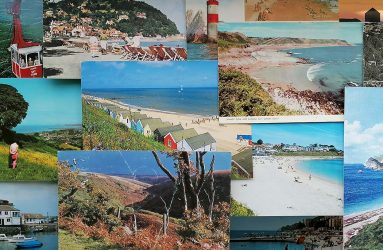 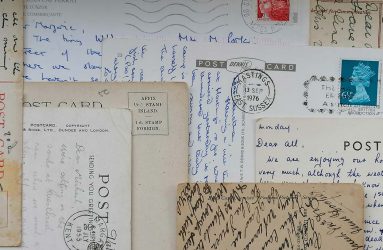 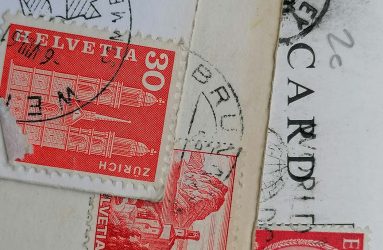 We love to include some of your own reflections in future posts and in our monthly print edition ‘Elevate your mood’ or quarterly printed tabloid ‘Take the time’. Why not write a few lines, try a poem or send us picture on the general theme of beach, holidays and summer? Email to ArtCare or send to ArtCare, Block 29, Salisbury District Hospital, Salisbury SP2 8BJ.