Elevate artist Stephanie Jalland ask us to reflect on the month of September. What comes to mind? What are the memories it holds for you? Do you share any of the thoughts described below that she has gathered when spending time with patients over the years?

‘Fair on September 1st, fair for the month’

September has arrived with a slight chill behind the sun and the scent of change in the air. A full ‘harvest’ or ‘corn’ moon has lit up the night this first week. I have picked up my first acorn, irresistible treasure now on display on my table and the blackberries have been rained on a bit too much, ‘kissed by the devil’ as the expression goes.

The name for September comes from the old Roman word Septem, seven because in the Roman calendar it was the seventh month. Asters, also known as starworts, frost flowers or Michaelmas daisies, are the birth flower for the month. It is said that when Astraea the virgin goddess of justice, innocence and purity, wept tears of sorrow for the desolation of the earth, her tears fell from the heavens and sprinkled the ground with these star-like flowers. The flower symbolises faith, love, achievement and wisdom.

The September sense of a fresh start or term runs deep in my veins and the change is exciting, new things to eat, do, find, see. I can’t resist the offer of free windfall apples left at a garden gate.

What do you associate with September?

“On a sunny September day like this, I’d be little again I’d be out the back garden on my swing, swinging backwards and forwards…legs out in the air” 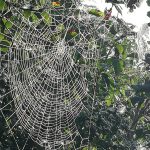 “Walking to school on that first day back filled with excitement and dread, and knowing that you were leaving summer behind”

“Fat bellied spiders in dew spangled webs on the walk to school, we used to flick their fat tummies”

“Going to buy a new pencil case, new pens and always wanting a crisp new uniform too but having hand me downs from my older sister”

“When I started the grammar school I was sent in a new blazer so big that it lasted the whole five years, but I felt the bees knees”

“Sometimes I’d borrow a pram from someone and take the children out for the afternoon, sitting under a tree in the park, looking at the flowerbeds and they change a lot at this time of year. I’d walk away and still be able to hear the music from the band in the bandstand. Parks are always different, the layout and the planting.”

‘September, blow soft ‘til the fruit’s in the loft’

“Decorating the church for harvest and going in to church a couple of days later and the ‘fruity’ smells together with smell of flowers and bread and the veggie aromas.” 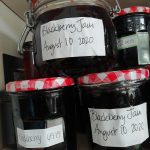 “I love this time of year. It’s so satisfying to clear, cut back, harvest, pickle and everything …it’s a fight to get to the pears, so far the wasps are winning.”

“I was evacuated to Dorset during the war so I got the taste for the country. It has never left me. September is blackberry picking and jam making. What we eat is who we are.”

“Muck spreading, that’s what I did, that smell gets in your nose could still smell it a week later. Muck spreading in September.”

‘Marry in September’s shine, your living will be rich and fine’

“We were married at a harvest moon. When we did our wedding waltz, my dress covered my feet, so I just had to go for it, pick my feet up and we ended up jiving. I love a jive.”

“My fiancé died four days before the wedding, running across the field in the rain after clay pigeon shooting, he dropped down dead beside me. I wear my wedding ring, but we never got married. That was September a very long time ago.”

You may like to write or think of a September poem. Make a list of what September makes you think of – the sounds, colours, sights, food, memories. You could begin the list with ‘September is’… Holding an acorn or tasting a blackberry can help unlock memories and associations you haven’t considered for some time. These two poems below were created on the wards with patients.

Dewy mornings.
Spiders webs.
Windfall apples and apple pies.
Back to school.
Chimney swept for the winter ahead. 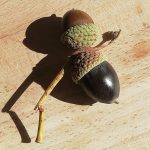 Orange
Running water
Leaves
Riding up the track
My sister on Poppy and me on Jack,
Encompassed by leaves.
Roast dinner
All the stodgy stuff after summer salads.
Red wine.

We love to include some of your own reflections in future posts and in our print edition ‘Elevate your mood’. Why not write a few lines, try a poem or send us picture on the general theme of September into autumn? Email to ArtCare or send to ArtCare, Block 29, Salisbury District Hospital, Salisbury SP2 8BJ.