In July 2020, ArtCare were to host two Year 11 school students for their work experience. Annually, ArtCare offers placements for those interested in community arts and in gaining valuable knowledge of how to apply art to creative projects in a hospital setting. Unfortunately this year, because of the Covid-19 outbreak forcing us into lockdown measures, we were unable to do placements in the usual way; but not wishing to miss out our two students undertook a ‘virtual placement’ and each created a piece of artwork based on a brief we set.

The first image (right) is from Kunle Taiwo, a student at Burgate School, who attended our digital drawing workshop earlier in the year before lockdown. During the summer he went on to try out different brushes and features to create this digital image using an Ipad tablet. Inspired by some large flowering plants (Acanthus mollis or Bear’s Breeches) that were in his neighbour’s garden, he enhanced the colours and textures by building up layers of drawing and photo montage and combined these using techniques learnt on our workshop.

The second student was Oliver Key who created a panoramic landscape of St Ives beach in Cornwall. Oliver said, ‘I chose this landscape to draw, because I have a lot of good memories from St Ives, and the wide shot of the sand, sea and sky was appealing to me. Pencil and charcoal drawing are my favourite mediums, as I like being able to sketch out and form a drawing like a sculpture on a page. I have just completed GCSE Fine Art and will be starting the A level in September.’ Oliver describes below how he created his digital artwork. 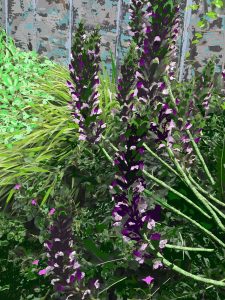 The landscape I picked to recreate digitally is of the Harbour Sand beach in St Ives, Cornwall, which I went to visit on an art trip last year. The original photo was taken as a panorama of the beach at low tide. In the original image, both sides of the harbour wall were visible, but my initial step was to crop this, giving more focus on the lighthouse. 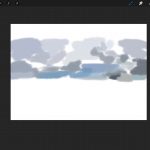 This image has some quite heavy detail, in forms of the cottages, shops and the harbour wall itself on the left-side. My first step in simplifying the image was picking out the block colours of the sky. I did this with an eyedropper on Procreate. I wanted to bring the texture of the clouds down to basic colours, then blend them to create a simple reflection of the original clouds 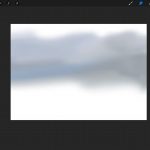 I used a charcoal brush to block the colours and then blended with an airbrush. This was my first time using procreate so I tried to include as many different brushes as I could to experiment with. 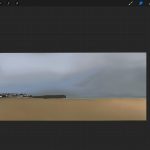 After this, I created a mottled sand texture with a bamboo chalk brush, which gave the feel of grains in a nice way. I tried to include darker patches where the shadows fell from the clouds. Next, I chose a scratchy pen brush and outlined the pier shape. I used one colour for this, and the block of colour is not solid, with areas of the background still showing through in some small places. With a similar brush I got the rough outlines and colours of the cottages and created a kind of patchwork of the basic shapes. This gave a nice effect which created the start of the background pieces.

This image was all the base elements of the image, minus any details. I found this to look a little empty, and the sky was quite dark on the right-hand side which I later fixed a little. I spent a short amount of time on the small expanse of sea. using a small brush and leaving areas white to give effects of waves crashing. 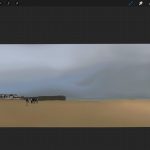 After this I began to outline a few of the figures, choosing only a small group of my friends who were in front of me on the beach. This kept the image basic while retaining the important parts of the original image to me. I also added the lighthouse in this stage, which is a lighter colour than in the real photo, to let it stand out against the sky more.

The final touch I added, further abstracting the photo, was the markings of the sand that formed a rough semi-circle from the harbour opening. I made these curves a lot more dramatic and unbroken, which made the image look more like a collage. These could have been done better, but I liked the way they seemed a little unreal. This also drew the eyes to the harbour opening and the lighthouse. I then cropped the image once more, to place the lighthouse at the centre both vertically and horizontally, with the group of friends at the one third mark, giving a nice balance, backed up with the sand markings.